Why the Mauritius oil spill is so serious

The amount of oil spilled from the Japanese-owned ship nearby the lagoons and coastal areas of south-east Mauritius is relatively low compared to the big oil spills the world has seen in the past, but the damage it will do is going to be huge and long-lasting, experts say.

Unlike most previous offshore spills, this has taken place near two environmentally protected marine ecosystems and the Blue Bay Marine Park reserve, which is a wetland of international importance.

So, it’s the location rather than the size of the spill which is causing greatest concern about its potentially serious environmental impact.

The stunning turquoise waters of the blue lagoon outside the coastal village of Mahébourg in Mauritius, the backdrop for numerous Bollywood movies, are now stained black and brown.

The ship, MV Wakashio, ran aground at Pointe d’Esny in late July, and oil began leaking from it last Thursday. Satellite images show the oil spill stretched out between the mainland at Pointe D’Esny and the island of Ile-aux-Aigrettes.

It is thought that more than 1,000 tonnes of fuel have leaked out of the ship and into the lagoon. A huge clean-up operation has been launched from the shore with many local people volunteering to help.

On 7 August, nearly two weeks after the shipwreck, the Mauritian government declared the incident a national emergency.

Mauritius is a biodiversity hotspot with a high concentration of plants and animals unique to the region.

“The wind and the water currents are not helping, they are taking the oil towards the areas that have vital marine ecosystems,” Sunil Mokshananda, a former Greenpeace strategist, who is on an island near the oil-spill site, told the BBC.

The Mauritian marine environment is home to 1,700 species including around 800 types of fish, 17 kinds of marine mammals and two species of turtles, according to the UN Convention on Biological Diversity.

“There are very few such marine areas with such rich biodiversity left on the planet. An oil spill like this will impact almost everything there,” said Dr Corina Ciocan, a senior lecturer in marine biology at the UK’s University of Brighton.

“It is not just about the light oil slick you see on the surface of the water caused by the spill.

“There will also be soluble compounds from the oil that will dissolve in the water, a mousse-like layer underneath the surface of the water, and then very heavy residues on the bed – so the entire marine ecosystem will be affected.”

The ship, MV Wakashio, is believed to have been carrying around 4,000 tonnes of fuel, of which nearly 1,200 tonnes have already spilled, according to the operator Mitsui OSK Lines.

Despite bad weather, Prime Minister Pravind Jugnauth said all the oil has now been removed from the ship’s fuel reservoirs, although a small amount remains on board elsewhere. There had been fears that the ship could break up, spilling even more oil into the sea.

Fuel has been transferred to shore by helicopter and to another ship owned by the same Japanese firm, Nagashiki Shipping.

Why the ship came so close to the lagoon is not clear and is being investigated by police.

At a news conference, Akihiko Ono, executive vice-president of Mitsui OSK Lines “profusely” apologised for the spill and for “the great trouble we have caused”.

One of the major concerns has been for coral reefs in the lagoon – which are sometimes called the rainforests of the sea – because of the diversity of life found in them.

Around 25% of fish in the ocean depend on healthy coral reefs, according to the National Oceanic and Atmospheric Administration of the US.

They protect coastlines from storms and erosion. Coral reefs and the marine ecosystems are the major pillars of Mauritian tourism which is a big part of the country’s economy. 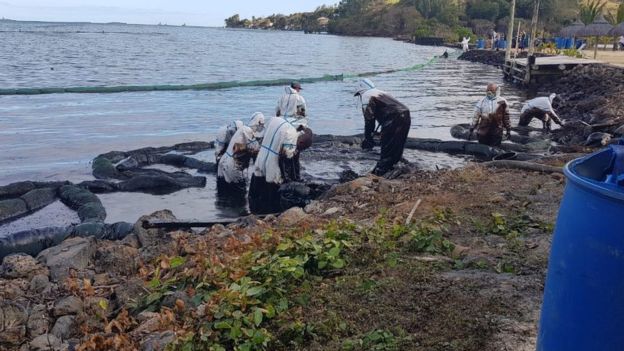 “The toxic hydrocarbons released from spilled oil will bleach the coral reefs and they will eventually die,” said Professor Richard Steiner, an international oil spill adviser and a marine biologist in Alaska, US.

Last year Professor Steiner helped the government of the Solomon Islands when a ship spilled oil on the coral reef off its coast:

“Although the oil spill wasn’t large – just a few hundred tonnes of oil – the damage to the coral reefs there have been massive.”

Impact of past oil spills

Although previous oil spills around the world have not been in as environmentally sensitive areas, they have still significantly affected marine animals and plants.

In 2010, the Deep Water Horizon incident off the Gulf of Mexico saw nearly 400,000 tonnes of oil spill, resulting in the death of thousands of species ranging from plankton to dolphins.

There were also other longer-term impacts on marine life including impaired reproduction, reduced growth, lesions and disease.

“Researchers found skin lesions on red snapper from the northern Gulf in the months after the spill, but the lesions became less frequent and severe by 2012,” wrote Dr Steven Murawski, marine ecologist at the University of South Florida, and Sherry Gilbert, assistant director of the university’s C-IMAGE Consortium in the journal The Conversation.

“There is other evidence of ongoing and increasing exposures to hydrocarbons over time in economically and environmentally important species like golden tilefish, grouper and hake.”

In 1978, a large crude oil carrier ran aground off the coast of Brittany, France, which leaked nearly 70 million gallons of oil into the sea.

Around 200 miles of the French coast were polluted by the oil slick, and it killed millions of invertebrates, such as molluscs and crustaceans. The spill also killed an estimated 20,000 birds, and contaminated oyster beds in the region.

Experts say that despite best efforts, generally less than 10% of oil spilled in incidents like these is successfully cleaned up.

France has sent a military aircraft with pollution control equipment from its nearby island of Réunion to help with the Mauritian spill, while Japan has sent a six-member team to assist the French efforts. The Mauritius coast guard and several police units are also at the site in the south-east of the island.

“The Mauritian government should do the environmental impact assessment as soon as they can,” said Professor Steiner.

“The impact is likely to remain for years.”