This eco-region comprises the coastal waters of the Canadian provinces of Manitoba, New Brunswick, Newfoundland, Nova Scotia, Ontario, Prince Edward Island, and Quebec. The U.S. state of Maine is also included, as are the eight small islands in the St. Pierre and Miquelon group.The dramatic coastline contained in the eco-region is characterized by fjords, cliffs, and bald rock created by advancing and retreating glaciers during the last Ice Age. There are numerous islands along the coasts. Offshore, the continental shelf extends to a distance of about 150 kilometres, with water depths from 200 to 300 metres.

The Northwest Atlantic forms a natural transition between the cold northern waters and the more temperate southern waters. Major ocean currents flow through it – cold arctic waters carried south by the Labrador Current merge near the Grand Banks with the warmer flow of the Gulf Stream. Average temperatures differ by more than 20¬∞C between the arctic waters and the Gulf Stream.

The Newfoundland-Labrador continental shelf extends to quite a distance off the eastern coast of Canada, encompassing the areas of the Labrador Current and the Grand Banks.

The Scotian Shelf surrounds the Canadian province of Nova Scotia, and extends to the shelf break, more than 200 nautical miles (nm) from the coast at some points. To the north the Laurentian Channel separates it from the Newfoundland Labrador shelf.

The Nova Scotia Current hugs the coastline in a southwestwardly direction and enters the Gulf of Maine through the Northeast Channel. As the current flows over the shelf, it mixes with offshore waters as well as water from the Labrador Current and the Cape Breton Current. The Nova Scotia Current then passes around the southern tip of Nova Scotia where it enters the Gulf of Maine, and once past the Gulf, it flows southward as the Coastal Current.

Sea ice is common throughout much of the region, depending on the season and latitude. Ice begins to form off the coast of Labrador in November or December, and by February or March, it reaches the northeast coast of Newfoundland and the Grand Banks, accompanied by thousands of icebergs. Most years, the St. Lawrence River freezes over, closing shipping. In May or June, the ice begins to clear and, by July, the coasts are ice-free well north on the coast of Labrador The Grand Banks are one of the world’s largest and richest resource areas, renowned for both its valuable fish stocks and (sadly, from a conservation standpoint) petroleum reserves.

Situated off the southeast coast of the Island, the Grand Banks are actually a series of raised submarine plateaus with a water depth ranging between 36.5 and 185 metres. The relative shallowness of the water allows extensive marine animal and plant life to flourish on the bottom. As well, the warm waters of the Gulf Stream pass over the southern portion of the Banks in winter but cover almost all of the Grand Banks in summer. Despite the conservation measures in place for fisheries on the Grand Banks, several species have declined drastically in recent years. By 1995, all major cod and flounder fisheries on the Grand Banks were closed and many other fish species such as turbot and ocean perch have had their catch levels sharply restricted. These fisheries are slowly recovering due to a concerted effort by both Canada and other nations to enforce existing conservation regulations on Grand Banks fish stocks.

The Chesapeake Bay and Delaware Bay complex is one of the largest estuaries on Earth. The region is fantastically productive, with huge and commercially vital fisheries, particularly for blue crab and oysters. It is one of the world¬πs most productive temperate estuarine complexes.

Diving in the region is a cool but rewarding experience. Local dive operators recommend that divers should plan a visit to the region between June and September when temperatures and water conditions are ideal. Dry suits are a must all year round! 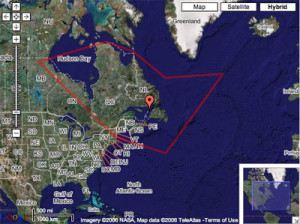