Indicator Species for this region

This eco-region comprises the coastal waters of the southerly Chilean regions (regiones) VIII to XII (8 to 12). A current of cold Antarctic water known as the Humboldt (or Peru) Current flows from the southern tip of Chile, northwards as far as Peru, then turns west and leaves the coast. This causes an upwelling of deep, nutrient-richwater to rise up along the coast, creating perfect conditions for abundant plankton and an extraordinary variety of marine mammals, seabirds, and fish. The current is slow and shallow. The waters of this eco-region teem with huge schools of small fish, mostly pelagic, such as anchovies, sardines and jack mackerel, These small creatures are the basis for the eco-region’s food chain that other species rely on, including Chilean dolphins and Burmeister’s porpoises. Both the endangered Humboldt and Magellanic (Spheniscus magellanicus), penguins benefit from the current and are often mistaken for eachother. A number of species of turtles, including the leatherback and loggerhead, can be found throughout the region, as are southern sea lions (Otaria flavescens) and South American fur seals (Arctocephalus australis).For scuba divers who are also interested in ornithology, the air is filled with the sharp calls of seabirds such as Wilson’s petrels, flesh-footed and sooty shearwaters, and grey and red-necked phalaropes. Inca terns will dive to catch anchovies.When the climatic phenomenon El Ni√±o comes to the area every few years, the ocean grows warmer and the surface layer of water becomes more dense. It is then difficult for the Humboldt Current to maintain its typical upwellings, and the water becomes less nutrient-rich. Fish and wildlife populations can collapse when an El Ni√±o changes wind and temperature patterns. This makes marine life vulnerable to intensive fishing practices, with overfishing leading to a loss of biodiversity. These events have also led to sequential changes, where sardines and anchovies have replaced each otherperiodically as the dominant species in the ecosystem. The shores of the remote Parque Nacional Chilo√©, in the Xth Regione provides an important haven for cetaceans, seabirds, sea lions, and sea otters (Lutra felina). The national park is home to numerous areas ofinternational importance as wintering areas for migratory shorebirds. One of only four Fjord Marine ecosystems in the world, the eco-region hosts the only South temperate and Sub polar marine ecosystem near South America. 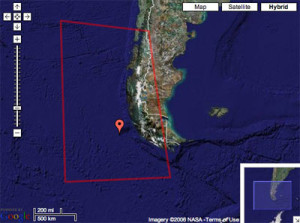