This eco-region comprises Madeira, the Canary Islands, the Cape Verde islands, plus the Atlantic coastlines of Morocco, Western Sahara and Mauritania.

The waters in this eco-region are influenced by the Canary Current, which flows along the African coast in a southwesterly direction between latitudes 30degrees N and 10 degrees N. It also extends offshore to longitude 20 degrees W. Driven by the prevailing winds, the current, in common with other eastern boundary currents, is wide, at about 1000 km, and slow, flowing year-round towards the equator. On average, the current is about 500 m deep.

As it travels south, it draws upwelled water from the coast, bringing relatively cool waters toward the equator. The water brought from below the surface by the upwelling is nutrient rich, and this supports highly productive marine systems, particularly for deep-sea fish and lobsters. The waters in the region are therefore more temperate rather than the tropical or sub-tropical that might be expected at these latitudes.

The Canary Current is strongest near the continental coast, becoming progressively weaker offshore. As it passes between the Canary Islands and the coast lying between Gibraltar and Mauritania it accelerates. The islands create a sheltered zone, with warmer water being found to the south of the islands. Some of the commercial species in this eco-region include sardines, pilchards, horse mackerel, chub mackerel and hake, with the structure of fisheries changing over the past few decades as a result of increased fishing activities.

Canary Current fisheries are increasingly under pressure from foreign fishing fleets coming mostly from the European Union countries. These licensed foreign vessels exploit the fisheries, but do little for local economies since their profits are exported. 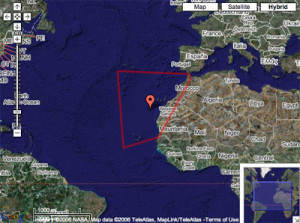