This eco-region comprises the coastal waters of the following countries: Belgium, Denmark, Estonia, Faroe Islands, Finland, Germany, Ireland, Latvia, Lithuania, The Netherlands, Poland, Portugal, Spain, Sweden, and the mainland and Islands of the UK. The Atlantic coastlines of France and Spain are also included, as are the provinces (fylker) of Norway, Aust-Agder, Ostfold, Rogaland, Telemark, Vest-Agder and Vestfold.Temperate Continental Shelves and their seas are generally highly productive regions of great biological significance, hosting resident and migratory fauna during various stages of their life cycle. The relatively shallow waters lead to warmer temperatures and seasonal stratification of the water column based on temperature. Seasonal variation, combined with inflows of freshwater from coastal streams and tidal action, contribute to a variety of habitats and a high degree of biodiversity.The Northeast Atlantic Shelf is no exception this general description. It is one of the most diverse and productive upwelling areas in the North Atlantic, as offshore currents drawing away warm surface water create an upward flow of cold, heavy deep-sea water. The deep-sea water of upwellings is generally rich in nutrients.

The North Sea is quite shallow and fed by several rivers, while the Norwegian Sea has deep trenches filled by particularly salty ocean water. In upwelling areas, the nutrient-rich water provides the basis for many fish communities. These ocean currents also make for rough seas and often contribute to strong storms.

The Wadden Sea extends along a 500 km stretch of the Danish, German, Belgian and Dutch coasts, the largest intertidal mudflat area in Europe and one of the largest temperate mudflat ecosystems on Earth. It supports salt marshes, wet meadows, sand banks, sand dune systems, and reclaimed polders.

The Irish Sea with its semi-enclosed geography is one of the more recognizable and ecologically distinct regional seas around the UK. It contains diverse habitats and species and hosts internationally important populations of sea birds, fish and cetaceans, particularly the bottlenose dolphin. The Irish Sea is a summer feeding area and ecological corridor for species such as basking shark and leatherback turtle.

A number of commercial fish stocks in the Irish Sea such as cod, whiting and sole are over exploited and now considered by marine scientists to be outside safe biological limits. The Dublin Bay prawn (Nephrops) is the most valuable fishery in the Irish Sea but it is being harvested to capacity. There are increasing development pressures from industries such as oil and gas, transport, renewable energy, pollution, shipping and tourism. Average seasonal temperatures in the region are notably higher than other geographical areas at comparable northerly latitudes in say Russia or Canada.

This is largely due to the effects of the Gulf Stream. This warm, surface ocean current originates in the Gulf of Mexico and flows northeast across the Atlantic, driven by the prevailing southwesterly winds.

The North Atlantic Drift forms the extension to the Gulf Stream which flows past the south coast of Labrador towards the west coast of Europe. It influences the climate of the UK and Northwest Europe by bringing with it humid mild air. Within the Gulf of Mexico, the Gulf Stream is very narrow, only 50 miles wide, and travels very fast at 3 mph, carrying water at about 25C.

Arctic cod, char, and capelin are just a few of the species that make the Northeast Atlantic Shelf such a rich fishing area. Several types of whales also call it home, including minkes, orcas, belugas, narwhals, bowheads, northern bottlenoses, and blues. 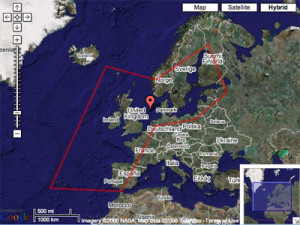