This eco-region comprises the coastal waters of the tropical Chilean regions (regiones) IX to XII (9 to 12), the countries of Columbia, Ecuador, El Salvador, Guatemala, Honduras, Mexico, Nicaragua, Panama and Peru. The Island group of the Galapagos, is also included here, as is the small uninhabited atoll of Clipperton Island.The Pacific coastline of these countries is dominated by estuaries of major river systems. On the offshore Islands and in areas away from the influence of freshwater, there are extensive coral formations. Coral diversity on the Pacific side of the isthmus is lower than on the Caribbean side. Coral cover, however, tends to be much higher and levels as high as 90% are common. This level of cover is rarely found on the Caribbean side. There is extensive fishing activity in the area.

The Sea of Cortez between mainland Mexico and the Baja Peninsula was once an enormously rich region, with major nutrient influxes from the Colorado River. The diversion of the river for irrigation has seriously altered the ecology of the Sea of Cortez.

Bottom trawling destroys eelgrass beds and kills shellfish. Pollution and mining present additional strains on the environment, as do overfishing and sedimentation. Although the Galapagos Islands are on the equator, the effect of a current of cold Antarctic water known as the Humboldt (or Peru) Current is felt there. This current flows from the southern tip of Chile, northwards as far as Peru, before turning west and leaving the coast.

The marine ecosystems of the Gal√°pagos Islands, like the terrestrial ecosystems, include a diverse flora and fauna, with high levels of endemism, an unusual phenomenon for marine communities. A large number of rare and endangered species are to be found, including green turtles (Chelonia mydas), flightless cormorants, and marine iguanas. The sea and its currents are a prime factor affecting climatic conditions in the islands.

Water temperatures show immense variety depending on the time of year and geographic position. The El Nino current affects the Galapagos with a flow of warm water southwest from the Panama Basin. This does not happen every year, but it is a regular cause of disruption to the seabirds that depend on the cold waters for fish.

Various forces – the equator, the diversity of currents, the surrounding waters and changes in elevation – all contribute to a variable and sometimes difficult climate. It also makes for a vital element in the complex world of the Galapagos Islands, with their two distinct seasons. 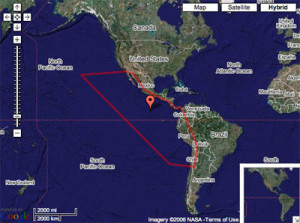