This eco-region comprises the waters off the east coast of Russia from the mouth of the Tumnin River, northeast along the shores of the Sea of Okhotsk, embracing the Kamchatka Peninsula and terminating northeast of the peninsula at the eastern limit of the Bay of Olyutorskiy in the Bering Sea.It also includes the northern part of Sakhalin Island from Makaro and Saritsa northward. The U.S. Aleutian Islands also fall into this region.

The Sea of Okhotsk is a semi-enclosed sea at the continental margin of Northern Japan and eastern Russia.

The sea is shallow in the north and deep in the south, with a maximum depth of 3916 metres, and a mean depth of 891 metres. Although it is in a temperate zone, there are marked differences in climate within the area. Surface temperatures range from -1.5¬∫ to -1.8¬∫ C in the winter to 11 to 13 ¬∫C in the summer. The current system is complex, with three large cyclonic spirals.

At depths below 30-75 metres, the water temperature is persistently cold, with an approximate temperature of -1.7 ¬∫C. The Sea is highly productive, with thriving fisheries.

The walleye pollock (Theragra chalcogramma) is the most abundant species, with a catch that exceeds the total catch of all the other fisheries. Other important commercial species include flounder, herring, halibut, Pacific sardine, cod, crab and shrimp. Stocks of Pacific salmon were historically abundant, but in the mid-1950s, they became depleted due to a deterioration of reproductive conditions in fresh water and the developing Japanese offshore fishery.

Today, salmon stocks remain low. Overfishing affects most of the other major fish stocks. The cool but fertile waters of the region provide food for numerous birds, making the Sea of Okhotsk by far the richest of the Russian seas in terms of seabird numbers. 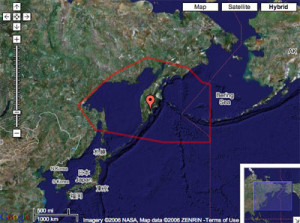