This eco-region encompasses the Atlantic coasts of the following African countries: Angola, Benin, Cameroon, Congo, Cote D’ivoire (Ivory Coast), Equatorial Guinea, Gabon, Gambia, Ghana, Guinea, Guinea-Bissau, Liberia, Nigeria, Senegal, Sierra Leone, and Togo. It also embraces the island groups of St. Helena and Sao Tome and Principe.The waters of this eco-region are strongly influenced by the effects of the Guinea current. This current flows eastward along the western coast of Africa at latitude 3¬∞N approximately, until it reaches the Gulf of Guinea. It has at least two sources: the North Equatorial Countercurrent and the Canary Current. The seasonal instability of these two currents can affect the seasonal variability of the Guinea Current. Areas of coastal upwelling characterize the Guinea Current, similar to that of other eastern ocean boundary currents, and this leads to an increased level of productivity. The region is rich with living marine resources and commercially valuable marine and coastal fish species, which include croaker, grunts, snapper, sardinella, triggerfish and tuna.

The Senegal and Gambia River Deltas along the coasts of Senegal, Gambia, Guinea and Guinea-Bissau of are diverse areas including large floodplains, saline and inter-tidal flats, dykes, and sand dunes. Important populations of seabirds and water birds nest in the region.

These deltas are also crucial stopover sites for migrating birds, especially waders. The Guinean or Atlantic humpback dolphin (Sousa teuzsii), and the large (up to 1.5m and 200kg) green turtle (Chelonia mydas) are to be found in these waters.

Mangroves play important roles as nursery areas for fishes and
shrimp, and in stabilising the shoreline. Mangroves are found discontinuously from Senegal to northern Angola, with important areas in the Niger delta, Cameroon, and Gabon. The West African manatee (Trichechus senegalensis) is an interesting inhabitant of the shallow coastal wasters and freshwater estuaries.

The Gulf of Guinea region with borders of Equatorial Guinea, Gabon, Congo, Angola, Cameroon, Nigeria, Benin, Togo and S√£o Tom√© & Pr√≠ncipe contains areas of upwelling characterized by high productivity, and the southern part of the region is a particularly rich fishery, particularly for deepwater shrimp off the coast of Angola. This is one of the most productive and diverse tropical upwelling zones in Africa and the eastern tropical Atlantic. Dolphin and porpoises are present as well as the West African manatee. Other species
include the green turtle (Chelonia mydas) and olive Ridley turtle (Lepidochelys olivacea).

The coral reefs of four islands in the Gulf of Guinea (Annob√≥n, Bioco, S√£o Tom√© and Pr√≠ncipe) have been ranked second in the list of the world’s top 10 coral reef hotspots by Conservation International. These
hotspots are rich in marine species found only in small areas and therefore highly vulnerable to extinction.

The exact area of reef is unknown, but is likely to be less than 200 sq. km. Key threats to the reef include coastal development, sediment pollution from logging, over-fishing, and a proposal to harvest coral.

There are two species of coral, Schizoculina africana and Schizoculina fissipara that are endemic to the area and are adapted to the very low salinities of the water from rivers flowing into the Gulf. 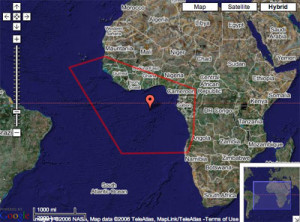