This region comprises the sub-tropical waters and Islands around New Zealand’s North Island, extending about halfway down the North Island (i.e. to Cape Egmont in the west and East Cape in the east, including the Kermadec and Three Kings island groups.New Zealand is made up of two main Islands, North Island and South Island, separated by the Cook Straight. The northern half of the country is influenced by the warm South Equatorial Current, while the southern half is influenced by the cooler West Wind Drift. The marine environment is diverse and includes estuaries, mudflats, mangroves, seagrass and kelp beds, reefs, seamount communities and deep-sea trenches.The marine systems here support a rich diversity of aquatic plants, fish, bivalves, and marine mammals, including sperm whales and a diverse community of dolphins, porpoises, and smaller whales.

The shelf surrounding New Zealand varies in width from 150 km in the northeast and southwest, to 3,000 km on the northwest and southeast plateaus and the region is considered moderately productive. Approximately 8000 marine species have been identified in New Zealand waters, including 964 species of fish, 2000 species of molluscs (snails, shellfish, and squid), 400 species of echinoderms (urchins and starfish), and 900 species of seaweed.

New Zealand’s coastal waters and habitats are generally held to be of high quality by international standards, but they are under stress in some areas, particularly near large estuarine towns and cities and the mouths of large rivers. Estuarine and marine ecosystems are also threatened by the invasion of exotic non-native species.

Kermadec Islands lie between 750-1000 km northeast of New Zealand, and form New Zealand’s largest marine reserve, created in November 1990. The marine environment around the islands provides important links between the more temperate waters of mainland New Zealand and tropical waters. The marine reserve extends from the shallows inhabited by the rare and protected spotted black groper (Epinephelus daemelii) to the deeper areas of the 3000 m deep Kermadec. Whilst you will find coral around these islands, they do not form reefs, as is common elsewhere in the Pacific.

The Three Kings Islands are a group of thirteen islands, plus many smaller islands and rocks, some 60km northwest of Cape Reinga at the northern tip of New Zealand. This area is where the tiderips are fast and furious as the Pacific Ocean rushes around the top of New Zealand to meet the Tasman Sea. Hapuka (Polyprion oxygeneios) and bass are readily seen on dives but given the sea conditions, this is an area better suited to the more experienced diver.

The Cavalli Islands, some 5km from Matauri Bay offers experienced divers an opportunity to see some spectacular marine life including sharks, whales and barracuda. Here you will find (and can dive) the wreck of the former Greenpeace ship, Rainbow Warrior. Sunk by French secret service agents in Auckland harbour in 1985, it was refloated and towed to Matauri Bay, where it now sits on the sandy bottom at 25m.

Rated by Jacques Cousteau as one of the top 10 dive sites in the world The Poor Knights Islands are located some 20km off the east coast of Northland and are the eroded remains of a group of volcanoes which erupted around 11 million years ago This subtropical reef system has been A marine reserve since 1981 and presents a stunning diversity of reef fish, pelagics, sponges, anemones, nudibranchs and sea weeds.

Diving in good visibility, you can expect to see tropical species such as spotted black groper, mosaic moray and Lord Howe coral fish, which are rarely found elsewhere in New Zealand waters.

The extensive coastline of the lower North Island supports a wide range of habitats, and embraces spectacular marine reserves and active volcanic islands. At the edge of the continental shelf, there is a wide range of marine life and fish species, including large schools of blue maomao, kingfish, and caverns full of huge golden snapper.

Sheltered reefs and sand bottom habitats are home to a rich variety of marine life. Orange and yellow sponges, starfish corals, anemones, octopus and reef fish such as butterfish, blue cod and red mullet are also residents of these waters. 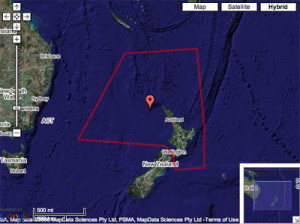