Indicator species in this region

This eco-region includes the Canadian Arctic territories of Nunavut, Yukon and the Northwest Territory; Russia¬πs Northern Coast; Greenland; the Norwegian provinces (fylke) of Finmark and Troms; Norway’s dependencies of Svalbard and Jan Mayen Islands.Whilst the freezing waters of the polar Arctic are not a natural destination for recreational divers, there are a number of important Large Marine Ecosystems (LME¬πs) that are worthy of note.The Kara Sea Large is located within the Arctic Circle on the huge Siberian shelf. This shallow sea is seasonally ice covered. The influx of warm ocean currents from the North Atlantic and high salt levels help provide mainly ice-free conditions from May to October, whilst a number of rivers (The Yenisei, Taz and Ob) discharge into the sea and are an important source of fresh water and nutrients. The rocky coasts harbour many small bays and inlets and are covered in shrubs and moss. There are many diverse habitats in this region. The Kara Sea LME is considered to be low in productivity, primarily because of the winter ice cover and the limited availability of both light and nutrients. Zooplankton biomass production is relatively low, and the distribution and species composition is influenced by the proximity of the Atlantic Ocean A diversity of wildlife is found in the area, including bearded seals, walruses, and narwhals. The polar bear hunts for seals on the frozen edge of the sea and fish such as Arctic cod, flatfish, and smelt are abundant. The largest marine protected area on the northern hemisphere, the Franz-Josef-Land nature reserve, is located within the region.

The Barents Sea is another shallow sea, bounded by Atlantic water in the south and west, and by Arctic or mixed water in the north and east, with large seasonal and annual changes in ocean climate. The distribution, growth and recruitment of the area¬πs major fish species is greatly influenced by climatic conditions, with ice covering between one and two thirds of the sea. The ice cover varies considerably by season and by year. Deemed to be moderately productive, the Sea is affected by three major current systems, the Norwegian, the Atlantic and the Arctic current systems. The ecosystem is characterized by a food web with only a few dominant species such as diatom, krill, capelin and cod. The Bering Strait and associated islands is a critical area for marine life migrating to and from summering grounds in the Chukchi Sea and elsewhere in the Arctic Ocean. The region supports huge seabird populations, including nearly 2 million murres and auklets, as well as one of the largest salmon runs in the world. There are also extensive kelp forests and eelgrass beds in coastal lagoons.

The terrestrial portion of this area includes polar desert (the word “Svalbard” in fact means “cold desert”), as well as productive tundra areas. Arctic terns breed here, before traveling 36,000 km to winter in Antarctica. The strait is used by 14 species of marine mammals, such as the endangered bowhead (Balaena mysticetus) and gray whales (Eschrichtius robustus), several species of seals, and walruses (Odobenus rosmarus).

The West Bering Sea is considered moderately productive, and includes over 450 species of fish, crustaceans and mollusks. The reported 25 species of marine mammals include polar bears, whales, walruses, and sea lions. The Bering Sea provides important habitat for gray whales, endangered stellar sea lions and a large diversity of seabirds. The sea hosts the world¬πs largest fish biomass for Pacific cod and cod-like fishes, with other fisheries including salmon, Alaskan pollock, walleye pollock, flatfish, rockfish, halibut, flounder and herring. The extent of the winter pack ice has markedly decreased, with the winter of 2001 heralding a relatively ice-free Bering Sea. Is diving amongst icebergs, seals, seabirds, walruses and polar bears in sub zero waters the ultimate dive challenge? There are a small number of organisations geared to help you to do just that. Important with all diving activities, even more important here, you must always be certain that you are in skilled, professional hands when you venture into the unknown. 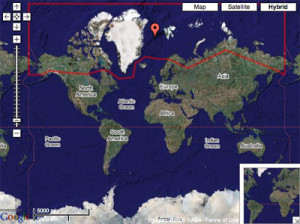