The countries in this eco-region are Argentina, the Falkland (Malvinas) Islands, South Georgia, South Sandwich and Uruguay.It is characterised by an extensive continental shelf off the coast of Argentina. The cold Falkland (Malvinas) current flows slowly north along the coast of Argentina from the extreme south. This current is strongest along the outer edge of the continental shelf where it travels at speeds of about 2 kilometres per hour.Prevailing westerly winds produce an upwelling of cold Antarctic water along the edge of the shelf that lowers the surface temperatures. Most of the shores of Patagonia are washed by an inshore component of the Falkland Current. The northward extent of this current is variable; generally reaching the latitude of the province of Buenos Aires in Argentina, but its influence can be felt as far north as Rio de Janeiro. At Rio de La Plata, the Falkland Current meets the warmer Brazil Current that flows in a south westerly direction along the coast of Brazil from about latitude 10¬∞S.Highly productive areas occur where there is mixing of inshore and deeper northbound drifts of water with those of the southward-moving warm Brazilian Current. The Brazil Current is strongest off Brazil, from Abrolhos Archipelago to the latitude of Rio de Janeiro.

South of the tropic of Capricorn, it becomes progressively weaker. The R√≠o de La Plata forms an important biogeographical barrier between the cold Falkland Current and the warm Brazilian Current systems.

Tides in Argentina become pronounced, particularly along the coast of Patagonia where tidal range can be as much as 7 metres. The coast of Argentina is an important breeding area for marine seabirds and mammals.

Punta Tombo represents the biggest breeding colony of Magellan Penguins, containing an estimated 1,000,000 individuals. Early this century, fur seals and sea lions were heavily exploited for fur and oil. This resulted in a dramatic decline of local seal populations, particularly in the case of fur seals.

Fisheries in the South West Atlantic have dramatically increased in the last decade. With this increase in fishing activities, overfishing and bycatch present significant threats and effective regulation is needed. Oil exploration and shipping activities in the Patagonian region have resulted in oils spillages in the past. Penguins, in particular, have suffered the effects of oil contamination during their migratory movements along the Patagonian coast.

Concerns about coastal pollution arising from industrial and other waste discharges have given rise to a view that the region lacks an effective coastal development and management planning process. 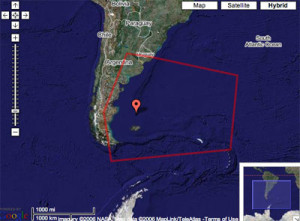