This eco-region comprises the coastal waters of the US states of Oregon and Washington, plus that part of California north of San Francisco. It also encompasses the waters around Vancouver Island, in the Canadian province of British Columbia.The California Current is a major influence on the climate of western North America and on the productivity of both terrestrial and marine ecosystems along the West Coast. This cool offshore current flows southward along the west coast of North America, its main influence extending from the Columbia River to central Baja California. It remains offshore for most of the year except for the month of September when the flow is quite close to the coast.The prevailing northwesterly winds help to generate a seasonal upwelling from February to September, and this contributes greatly to the high rates of productivity seen in the region. The rate and volume of upwelling is greater than anywhere else along the west coast of North America.

Water temperatures are fairly constant throughout the year. Average surface water temperatures range between 9 and 11C in winter and 13-15C in summer. Like all upwelling zones, the area off these coasts supports huge marine mammal, seabird, and fish populations. The area is best known, however, for the extensive kelp forests and for the southern sea otters (Enhydra lutris), which wrap themselves in kelp to keep from floating away while they feed on oysters and sea urchins.

There is also some endemism in invertebrates and fishes. The mouth of the Columbia River is rich in wildlife. The East Mooring Basin is a popular haul out area for California sea lions, harbour seals and cormorants. Many of the low islands, which are grassy and forested wetlands, are home to bald eagles, great blue herons, numerous diving and dabbling ducks, and river otters.

Jacques Cousteau, arguably the father of modern day scuba diving, once proclaimed that the spectacular coastal waters of Vancouver Island and Nanaimo were Othe best temperate water diving in the world and second only to the Red Sea¬π. Certainly the marine life that you are likely to encounter when diving here includes giant pacific octopus and sixgill sharks, in addition to resident wolf eels and hundreds of harbour seals. Divers can also rift through gardens of colourful kelp, anemones and sponges. There are also a number of artificial reefs in the area.

There are a multitude of environmental threats to the region, including coastal water pollution, especially around major cities, leading to potentially contaminated seafood. The intense harvesting of abalone leads to loss of habitat and food for sea otters.

Non-biodegradable plastics represent a particular problem as they trap or maim animals and may cause death by drowning or strangulation. 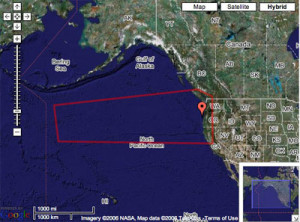