The Gulf of Mexico is a deep marginal sea, and the ninth largest body of water in the world. It lies south and west of the continental US east and north of Mexico, and northwest of Cuba. It is bounded by five US states, six Mexican states, and the island of Cuba. Water enters the Gulf through the Yucatan Channel of Mexico, and exits through the Straits of Florida. An additional major water source is fresh water from US and Mexican rivers. The Mississippi River alone drains over 40% of the United States, and has the seventh largest discharge of world rivers!

Coral reefs are found in a discontinuous arc around the Gulf with greatest development along the Florida Keys and Cuba A prominent feature in the Gulf of Mexico is the Loop Current, which enters through the Yucatan Channel, and exits through the Straits of Florida to become the Florida Current, and later the Gulf Stream. Large unstable rings of water are shed off of the Loop Current, bringing massive amounts of heat, salt and water across the Gulf. Thus, the Loop Current plays an important role in shelf nutrient balance, at least in the eastern Gulf of Mexico. About 1/3 of the area of the Gulf of Mexico is continental shelf. The broad, shallow shelves are strongly wind-driven out to depths of approximately 50-60 meters, and are topographically diverse with smooth slopes, escarpments, knolls, basins and submarine canyons.

The Gulf of Mexico is showing signs of ecosystem stress, mostly in bays, estuaries, and coastal regions, that can be directly related to toxic chemicals, physical restructuring of the coast, local harvesting of preferred species, and nutrient loading from rivers. Oil and gas production i the Gulf adds to the ecosystem stress.

The Caribbean Sea is a semi-enclosed sea located between North and South America, and bounded by Central America to the west. It is the second largest sea in the world and is noted for its many islands, including the Leeward and Windward Islands situated on its eastern boundary, Cuba, Puerto Rico, Jamaica and the Cayman Islands. It comprises four deep basins: the Venezuelan Basin in the east, the Colombian Basin in the west, the Cayman Trough in the northwest, and the Yucatan Basin in the north. There is little seasonal variation in surface water temperatures, with these ranging from 25.5¬∞ C in the winter to 28 ¬∞ C in the summer.

The coral reefs of the Caribbean Sea are a key component of the shallow water ecosystem, but are unfortunately showing signs of stress. Living corals are made mostly by calcium-secreting corals and thrive in clear, oceanic, shallow, low-nutrient waters, with plenty of sunlight and warm temperatures. There have been unexplained episodes of large-scale coral bleaching and coral deaths. Bleaching may be due to an increase in water temperatures, and occurs when the coral expels its resident symbiotic algae. Coral reef degradation is caused by increased sedimentation, , excess nutrients, ship groundings, storms, hurricanes, anchor damage and diver contact.

The principal species commercially harvested in the Caribbean Sea are spiny lobster (Panulirus argus), coral reef fishes, and conch. The spiny lobster is one of the most valuable species of the Caribbean and there is concern over its long-term sustainability as a result of increased activity.

In addition to coral reefs, there is a diversity of habitat types including mangroves, seagrass beds, and upwelling areas. Within the region, the Belize Barrier Reef is recognised as a regional centre of marine endemism, particularly for fish and invertebrates. With a length of 720 km., this is the second largest barrier reef in the world, after Australia’s Great Barrier Reef. The reef system is also unique in featuring three atolls, one of which, the Turneffe Atoll, is considered to be the best example of an atoll in the Caribbean. Associated with the reef are extensive areas of relatively pristine coastal wetlands, lagoons, seagrass beds, and mangrove forest, which provide critical habitats for threatened species such as sea turtles and manatees.

This eco-region also includes the Andros Barrier Reef, located 2-5 km. offshore of the island of Andros in the western Bahamas. The reef is considered one of the finest barrier reefs in the Caribbean and is the third largest reef system in the world. It is an extremely important resource for the fishing industry, and provides habitat for conchs, sea turtles, and seabirds. 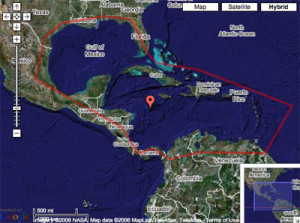