Brazil’s continental shelf shows a variety of widths, being wider in the north of the country and becoming narrower in the north east, the south east and the south. The warm Brazil Current flows in a southwesterly direction along the coast of Brazil from about latitude 10¬∞S to the R√≠o de La Plata in Uruguay, which forms an important biogeographical barrier between the cold Falkland (Malvinas) Current and the warm Brazil Current.

The northward extent of the Falkland Current is variable; generally reaching the latitude of the province of Buenos Aires in Argentina, but its influence can be felt as far north as Rio de Janeiro. Highly productive areas occur where there is mixing of inshore and deeper northbound drifts of water with those of the southward-moving warm Brazilian Current.

The Brazil Current is strongest off Brazil, from Abrolhos Archipelago to the latitude of Rio de Janeiro. South from the tropic of Capricorn, it becomes progressively weaker. Tides along the Brazilian coast are generally weak, growing in amplitude from south to north, from approximately 2 metres around Cabo Frio (Rio de Janeiro State) to a maximum of 12 metres in the Amazon estuary. The warm and shallow Guyana Current flows along the north coast of Brazil and links with the Caribbean circulation system. Both the Brazil and Guyana Currents are fed from the east by the westerly flowing South Equatorial Current.

The South Equatorial Current branches to the north and south, with the southerly branch becoming the Brazil Current and the northerly branch becoming the Guyana Current. This variety of physical conditions creates a diverse range of habitats, which in turn are home to a large variety of species Brazil has one of the most extensive river systems in the world, with eight major drainage basins. There are a number of important estuaries in the region in addition to several unique ecosystems, including dunes, mangroves, restingas (scrubby vegetation typical of sand marine barrier islands) and coral formations.

The Atol das Rocas is the only coral atoll in the South Atlantic. It is the region’s most important nesting site for tropical marine birds and its second most important breeding ground for Green Turtles (Chelonia mydas). Ten of eighteen coral species are endemic in this ecoregion. Where the shelf narrows in the central section of the region, the substrate is made up of carbonate sediments and is affected by the South Equatorial Current.

The wide Abrolhos Bank of the east Brazil shelf forms a physical barrier to the Brazil Current, so upwelling and land conditions create even more diversity. General environmental threats include industrial pollution, overfishing and habitat loss. 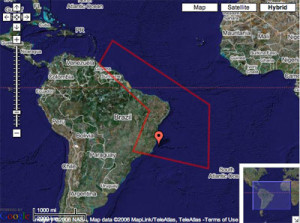