This eco-region comprises the coastal waters of the Republic of South Africa, broadly from Cape Aghulas, east to the border with Mozambique. The waters of this eco region are strongly influenced by the warm Agulhas Current, which flows south down the east coast of Africa before meeting the cold Benguela current off the Cape of Good Hope.

As the current reaches the southern tip of Africa, it retroflects, or turns back on itself, and flows eastward as the Agulhas Return Current. The Aghulas is one of the strongest currents in the world, probably second after the Gulf Stream.

The coastline embraces a mix of mangrove forests, unique parabolic sand dunes, and beds of sea grass that provide food and habitat for seabird colonies, sea turtles, and numerous fish.

South Africa’sDe Hoop Nature Reserve is located within this ecoregion, Marine mammals such as dolphins and sea ls occur in the waters off the coast and southern right whales calve and mate in the sheltered bays of De Hoop each year between May and December. At least 250 species of fish occur in the marine protected area.

As the warm waters of the current meet and mix with the cooler waters of the southern ocean, the resulting conditions allow a mixture of species that are characteristic of different regions. Although not enjoying the biodiversity of tropical regions that lie towards the equator, there are nevertheless a number of endemic fish and invertebrates in the ecoregion. Some of these include the Zanzibar butterfly fish (Chaetodon zanzibariensis), African butterfly fish (Pantodon buchholzi) and the ear-spot angelfish (Pomacanthus chrysurus). There is also one other species of fish that has been found in these waters, but you are very unlikely to see one on any of your dives!

It was in the waters off East London that the long-thought extinct coelacanth was first Ore-discovered¬π in 1938. Threats to the habitats and species in the region include the loss of mangrove forests, siltation of coral reefs, destructive fishing practices (such as the use of fine-mesh nets), and poor rural sewage treatment leading to contamination. Contamination from oil tanker spills and polluted ballast waters have also posed problems for the region. 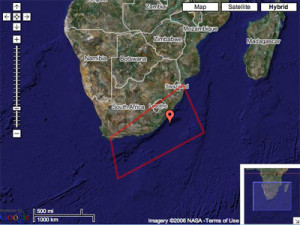