This region comprises the Canadian province of British Columbia north of Vancouver Island, and the US state of Alaska from its southern border, through the Gulf of Alaska and Bristol Bay, with its northern limit at the waters around Hagmeister Island.The Gulf of Alaska lies off the southern coast of Alaska and the western coast of Canada and is separated from the East Bering Sea by the Alaska Peninsula. The Alaska Current spirals anti-clockwise in the region and there are also incursions of the colder Sub-arctic Current. The Alaska current current, as it splits towards the south, serves as the boundary between the Gulf of Alaska and the marine ecosystem of the California Current, south of this eco-region.

The Gulf of Alaska¬πs marine ecosystem is considered to be highly productive. Upwelling in the centre of the Alaska spiral (gyre) pushes nutrients, phytoplankton and zooplankton onto the shelf along the edge of the Gulf. Like all upwelling zones, the area off these coasts supports huge marine mammal, seabird, and fish populations.

Some pollution problems affecting the region include predation by invasive species, discharges of oil products, and industrial and agricultural contaminants.

Prince William Sound is routinely crossed by large oil tankers. In 1989, the Exxon Valdez spilled eleven million gallons of crude oil off the Port of Valdez, the terminal point of the Trans-Alaskan Pipeline. This was the largest tanker oil spill in US history and it contaminated 1,500 miles of the Gulf coastline. More than a decade later there remains concern over the lingering effects of the oil spill and the pockets of residual oil in the environment, particularly in the western part of Prince William Sound. More common than spills, however, are smaller discharges of refined oil products, crude oil and hazardous substances.

Diving in the region is a cool but rewarding experience. Alaska is full of natural beauty; mountains, bays and islands. On the way to any dive sites you are very likely to observe sea otters, sea birds and occasionally sea lions, orcas and humpback whales.

And then there are the kelp beds! 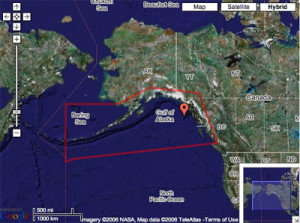