This eco-region comprises the coastal waters of the southerly Brazilian states (estados) of Parana, Rio Grande Do Sul, Santa Catarina and Sao Paulo.

Brazil’s continental shelf shows a variety of widths, being wider in the north of the country and becoming narrower in the north east, the south east and the south. The warm Brazil Current flows in a south westerly direction along the coast of Brazil from about latitude 10¬∞S to the R√≠o de La Plata, which forms an important biogeographical barrier between the cold Falkland (Malvinas) Current and the warm Brazil Current.

The northward extent of the Falkland Current is variable; generally reaching the latitude of the province of Buenos Aires in Argentina, but its influence can be felt as far north as Rio de Janeiro.

Highly productive areas occur where there is mixing of inshore and deeper northbound drifts of water with those of the southward-moving warm Brazilian Current. The Brazil Current is strongest off Brazil, from Abrolhos Archipelago to the latitude of Rio de Janeiro. South from the tropic of Capricorn, it becomes progressively weaker.

Tides along the Brazilian coast are generally weak, growing in amplitude from south to north, from approximately 2 metres around Cabo Frio (Rio de Janeiro State) to a maximum of 12 metres in the Amazon estuary.

Brazil has one of the most extensive river systems in the world, with eight major drainage basins. There are a number of important estuaries in the region in addition to some unique ecosystems, including mangroves and dunes. 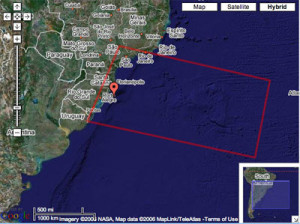