This eco-region comprises the temperate Atlantic coastal waters of the U.S. states of Connecticut, Delaware, Maryland, Massachusetts, New Hampshire, New Jersey, New York, North Carolina, Rhode Island, South Carolina and Virginia.Temperate Continental Shelves and their seas are generally highly productive regions of great biological significance, hosting resident and migratory fauna during various stages of their life cycle. The relatively shallow waters lead to warmer temperatures and seasonal stratification of the water column based on temperature. Seasonal variation, combined with inflows of freshwater from coastal streams and tidal action, contribute to a variety of habitats and a high degree of biodiversity.The continental shelf of the eastern United States is no exception this general description. It is a diverse and productive upwelling area, as offshore currents drawing away warm surface water create an upward flow of cold, heavy deep-sea water. The deep-sea water of upwellings is generally rich in nutrients. Upwellings of the sub-tropical and lower-latitude temperate waters of the Southeast shelf ecosystem, however, are not as intense and evident as in the higher latitude regions.The major currents in the North Atlantic flow in a clockwise direction. This huge area of rotating water is better known as the North Atlantic Gyre (spiral). If you were to drop a bottle in the Gulf Stream off the New Jersey coast, you would probably find it somewhere off the Irish or English coasts in five months or so. It could then find its way down the Atlantic coast of southern Europe, then Africa, then head west just north of the Equator and turn northwest until it washed back up onto the beaches of the eastern United States. It would take in the region of three years for the bottle to complete its journey back to New Jersey.

Bays and sounds with extensive coastal marshes characterize the southern portion of this eco-region. These wetlands form unique habitats that provide important links to production of living marine resources. A 10 to 20 km-wide coastal zone is characterized by high levels of plankton production throughout the year, while offshore, on the middle and outer shelf, upwelling along the Gulf Stream front and intrusions from the Gulf Stream cause short-lived plankton blooms.

Reef fishes include more than 100 species that prefer coral reefs, artificial structures, or other hard-bottom areas, and tilefishes that prefer muddy bottom areas. They range along the coast to a depth of about 200 meters. These compete with other reef fauna, including spiny lobsters, conch, stone crab and corals.

Further north, New Jersey enjoys a somewhat unique position for biodiversity. It sits at the southern limit for species typical of colder, more northerly waters, whilst many species more at home in sub-tropical and tropical waters are swept into the region by the Gulf Stream.

This diversity, coupled with the large number of wrecks and artificial reefs, makes diving in this area particularly interesting. 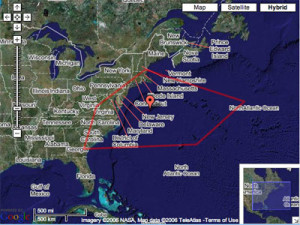