This eco-region comprises the Chinese waters of the Yellow Sea; North and South Korea; Japan, north from the southernmost tip of Kyushu and the Sea of Japan; Russia from the border with North Korea north to the mouth of the Tumnin River; the southern part of Sakhalin Island from Makaro and Saritsa south.The Yellow (Huanghai) Sea is a partially enclosed body of water bounded by the Chinese mainland to the west, the Korean Peninsula to the east, and a line running from the north bank of the mouth of the Yangtze River to the south side of Cheju Island. It is a shallow sea with an average depth in the region of 44 metres, sloping gently away from the Chinese coastline.The Yellow River and the Yangtze have both formed large deltas and deposit large amounts of sediment into the sea. These deposits are mineral rich and give the waters a yellow hue, hence the name. This highly productive Sea is marked by seasonal variation, and supports substantial populations of both cold temperate (eel-pout, cod, flatfish, Pacific herring) and warm water (skates, gurnard, jewfish, small yellow croaker, spotted sardine, fleshy prawn, southern rough shrimp) species.There are eleven species of mammals including fin-less porpoise, seals, and sea cow lions. Some whale species may also be spotted here, although these are just remnants of the the pods that used to migrate and breed there.

The Yellow Sea is one of the most intensively exploited areas in the world. There are over 270 fish species, with about 100 species of fish and crustacea being commercially harvested. This exploitation of the Sea¬πs resources means that over time, stocks some of the more commercially valuable species have declined, to be replaced by smaller, less valuable species.

The Sea of Japan (also known as the East Sea) is another highly productive, semi-enclosed sea, connected to the Sea of Okhotsk, the Northern Pacific Ocean and the East China Sea through four shallow straits. The shallowness of these straits limits the water flow in and out of the Sea and contributes its semi-enclosed character.

The Tsushima Current, a small branch of the warm Kuroshio Current, enters the Sea of Japan through the Tsushima Strait between Kyushu and Korea and flows out to the Pacific through the Tsugaru and Soya Straits. The average depth of the sea is 1350 metres. The northwestern area of the Sea is colder than the remaining southerly part, with sharp declines in temperature in the winter and ice forming in the Tartarskiy Strait from November to April. Seasonal temperature fluctuations are as high as 20 degrees C in the northwestern portion, and 14 degrees C in the southern portion, allowing the region to support tropical to Arctic species.

Commercially important species include sardine, flounder, Pacific cod, Pacific salmon, red sea bream, with the Japanese sardine (Sardinops melanostica), one of the most abundant pelagic fish in the Sea of Japan, contributing more than 70 percent of the total catch.

The country that is Japan is actually an archipelago that stretches over 3000 kilometres from north to south. Because of this, northern Japan is located in the North Temperate Zone, experiencing temperatures that range from cool to cold, while the southern Japanese islands, (outside this eco-region) are situated near the Tropic of Cancer and enjoy tropical temperatures. Summers are humid and hot, whilst areas impacted by the Asian monsoons suffer severe weather, despite the temperate latitude.

Most areas of Japan have a rainy season, known as tsuyu, sometime during June and July, with occasional typhoons, from August to October, bringing heavy rains and high winds to some parts of the region. High levels of land reclamation and coastal development has led to the destruction of mangrove areas and harmed extensive areas of coral reef in the south of Japan. Oil pollution is a significant problem along major shipping routes and an increasing number of accidents have occurred in recent years.

The former Soviet Union and now Russia have reportedly dumped radioactive waste in the Sea of Japan. 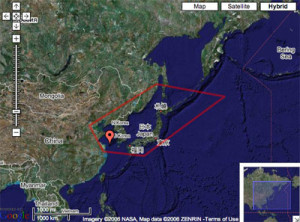