The Danajon Bank in the central Philippines was once a geologic treasure chest brimming with marine life. It is the only double barrier reef in the Philippines and one of only six double barrier reefs in the world. Overfishing depleted stocks by 240 percent since 1960, according to one recent study, driving fishermen to more and more desperate measures in the hunt for dwindling numbers of fish.

As fish declined, the number of nets set in waters to catch them increased. It didn’t take long for discarded fishing nets to pile up by the ton on beaches and in gnarled root wells in the mangroves. Further offshore, these so-called ghostnets drifted untethered for years, snagging fish, sponges, crabs, and sea cucumbers—or settled on delicate reefs, smothering the corals.

Today, the same fishermen who once hauled out rabbitfish and blue crabs now harvest the nets themselves. They work in a flourishing net retrieval program with the twin goals of paying a living wage while helping the beat-up ecosystem recover. NetWorks, operated in part by the Zoological Society of London, is one of a growing number of programs in coastal countries to take on the increasing problem of discarded or lost fishing nets and the harm they cause. 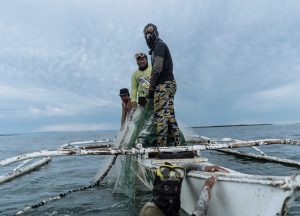 Industry recycling of fishing gear is still relatively young, and lagged behind efforts to keep plastic out of the ocean until recent years, even though the introduction of nylon nets transformed the fishing industry in the late 1970s, enabling scale and efficiency to increase fishing globally.

“I think nets get sidelined as they are not as tractable for the general public in the way that bottles, straws, and bags are because they are the responsibility of the fishing industry,” says Heather Koldewey, a marine scientist and chief of the Zoological Society of London’s global programs. “It’s a different problem to solve than land-based waste management to reduce the flow of plastics into the ocean,” says Koldewey, who is also a National Geographic fellow.

But the problem is real. More than 705,000 tons (1.28 billion pounds) of fishing nets are lost yearly, according to the United Nation’s most recent global count, published in 2009. In the Great Pacific Garbage Patch, almost half the weight of surface debris is fishing gear, according to a 2017 study by Laurent Lebreton, an oceanographer with the Ocean Cleanup Foundation.

All told, fishing gear makes up about 10 percent of the plastic trash in the oceans, but accounts for an outsized proportion of fatalities to marine wildlife. More than 100,000 large whales, sea lions, and seals are killed every year, according to World Animal Protection, as well as an “inestimable” number of sea birds, turtles and fish.

Turtles seem especially vulnerable to entanglement. In Australia, home to six of the world’s threatened species of sea turtles, the most likely way a sea turtle will die is by becoming entangled in a discarded fishing net, according to research by Denise Hardesty and Chris Wilcox, research scientists at Australia’s Commonwealth Scientific and Industrial Research Organization (CSIRO).

In the Gulf of Carpentaria, which spans Queensland and the Northern Territory in Australia, discarded or lost fishing nets wash ashore in some of the highest densities globally—up to three tons per kilometer yearly. Hardesty calls the nets “floating death traps,” and she cites examples elsewhere around the globe. When 870 ghostnets were recovered in Washington state, for example, they contained more than 32,000 marine animals, including more than 500 birds and mammals.

World Animal Protection estimates that 30 or 40 marine animals can become entangled per net. How nets are lost can vary dramatically in the same region, and depends on weather, sea conditions, vandalism or theft, or whether the fishery is operating illegally. In northern Spain, for example, one gillnet fishery loses an estimated 2,000 nets per year, while another gillnet fishery in the same region loses 100 gillnets yearly.

Net recovering programs are now setting up in coastal places around the world, from Greece to the North Sea to New Zealand. (Learn how Indian fishermen are collecting plastic waste.)

The Danajon Bank, which extends for 97 miles between the central Philippines islands of Bohol, Leyte and Cebu, was the cradle of all Pacific marine life. As fishing declined, forcing local fishermen in the island villages to quit, NetWorks arrived in 2012 to set up a pioneering net recovery program. But as is common in poor places—more than 60 percent of local fishing families live below the U.S. poverty line—in order to save the marine species at risk, the scientists had to save the people who had lived off the seas for generations.

The net recovery program would not only clean up the waters, it would create new jobs. Former fishermen dive for nets and pull them onto shore. They are transferred to a baling station on the island of Bohol, where they are tightly compressed into cubes, then shipped to Aquafil, a net recycling company in Slovenia that buys fishing nets from around the world and turns them into nylon yarn. The yarn, in turn, makes its way to carpet manufacturers in the United States.

“We connect marine conservation with the business model that brings marginalized communities in the developing world into a mainstream global supply chain,” Koldewey says.

The goal has been to build a self-sustaining business; so far, the program has shown enough promise that NetWorks has expanded to a second hub in the Philippines and to Cameroon in Central Africa and Indonesia.

“The work is part of a bigger strategy to change people’s perspective on plastics. You don’t have to throw plastics away because you can derive economic benefit from it,” says Amado Blanco, as he takes the four-hour trip on an outrigger boat from Cebu to the tiny island of Guidacpan, where third-generation fishermen have become part of a global entrepreneurial network.

Blanco has served as the program’s Philippines project manager for long enough to have seen attitudes evolve.

“People are no longer burning their nets,” he says. “They are are no longer throwing nets on the shore or into the ground. They are keeping them in sacks and selling them.”