The world’s leading climate science organizations have joined forces to produce a landmark new report for the United Nations Climate Action Summit, underlining the glaring – and growing gaps – between agreed targets to tackle global warming and the actual reality.

The report, United in Science, includes details on the state of the climate and presents trends in the emissions and atmospheric concentrations of main greenhouse gases. It highlights the urgency of fundamental socio-economic transformation in key sectors such as land use and energy in order to avert dangerous global temperature increase with potentially irreversible impacts. It also examines tools to support both mitigation and adaptation.

“The Report provides a unified assessment of the state of our Earth system under the increasing influence of anthropogenic climate change, of humanity’s response thus far and of the far-reaching changes that science projects for our global climate in the future. The scientific data and findings presented in the report represent the very latest authoritative information on these topics,” said the Science Advisory Group, which is co-chaired by WMO Secretary-General Petteri Taalas and Leena Srivastava, outgoing Vice Chancellor of TERI School of Advanced Studies. 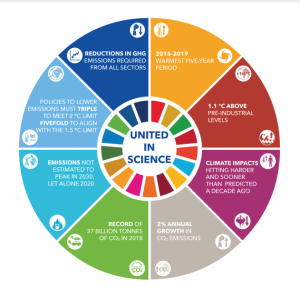 “It highlights the urgent need for the development of concrete actions that halt global warming and the worst effects of climate change,” said the Science Advisory Group.

The Science Advisory Group comprises highly recognized and respected international climate scientists, with expertise in different areas of climate science including on mitigation and adaptation.

The report was coordinated by the World Meteorological Organization and compiled under the auspices of the Science Advisory Group to the UN Secretary-General’s Climate Action Summit. It aims to present a “transparent envelope” of authoritative and actionable cutting-edge science.

The synthesis report consists of short summaries from contributing agencies: the World Meteorological Organization, UN Environment, Global Carbon Project, the Intergovernmental Panel on Climate Change, Future Earth, Earth League and the Global Framework for Climate Services. This is complemented by longer, individual reports, presented as a package to a high-level science event on 22 September and to world leaders at the Climate Action Summit on 23 September.

“Now, I believe in science. I believe in what has been considered . . . the most valid scientific position today,” said UN Secretary-General Antonio Guterres.

“And that is the reason why I’m convening a climate summit in New York in September, and that is the reason why I will be appealing to leaders in relation to a much stronger commitment of their countries for climate action . . . in order to make sure that we are able to abide by what the scientific community is telling us is absolutely essential to rescue the planet,” said the UN Secretary-General in remarks to the G20 meeting in Osaka, Japan, in June 2019 and reiterated in the synthesis report.

“Our ambitions to reverse the global climate emergency are backed by solid science and data. What we need more than ever is to see bold policy action and further investment and research into cleaner, greener energy. This will ensure we are able to roll back emissions,” said Inger Andersen, UNEP Executive Director.